It is a safe bet that there have been several occasions when you’ve been watching a video and felt it would be nice if you could save it and watch it later – only there was no option to do so.

The good news is that there is a way to save any video so that you can watch it later even when you’re offline.

Essentially what you need to do is record it from your screen using a screen recorder for Mac such as Movavi Screen Capture Studio for Mac.

It has been launched in the year 2004, and now, it has grown big. By selling its reliable products in more than 150 countries, Movavi has established its brand awareness on the web.

I’m a great fan of its user-friendly software applications as it is possible to make, edit, and convert the videos to almost any format and the screen recorder is my preferred one.

Let me tell some valid reasons that support my viewpoints!

You can perform the below tasks with the screen capture tool of Movavi!

# Record all the screen activities

# Watch the saved videos on any device

# When capturing the videos, it is possible to take the screenshots and edit them

# Are you a movie lover? Record the films and music with excellent quality

# Make the presentations by adding your voice and webcam video

#  Save online chats and meeting calls

# Record your PC along with the microphone sound

How To Capture Screen With Movavi?

I’m using the Apple device, and hence I would like to explain how to record your PC screen with Movavi screen capture for Mac.

You’ll be recording it straight off your screen, and you can capture any video whatsoever that happens to be there.

Needless to say, that can be useful, mainly if you watch different types of videos from various sources regularly.

On top of being so flexible, it is also effortless to capture the videos that you want to save with Movavi Screen Capture Studio for Mac.

2. Use the mouse cursor to draw a frame over the video that you want to record.

3. Ensure that the ‘System Audio’ icon is highlighted in green and click it once if not.

4. Click ‘REC’ to start recording after a 5-second delay, and play the video at the same time. 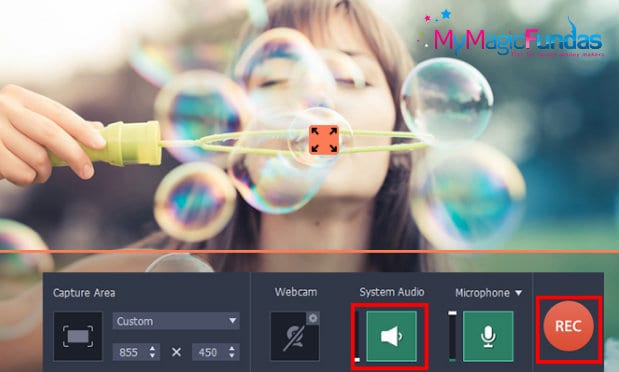 All in all, it is very straightforward, though if you want you can adjust the other recording parameters in Movavi Screen Capture Studio for Mac as well.

It will let you set up the frame rate, select the audio source, control the sound levels, and even capture any keyboard and mouse actions.

However, the real crowning glory of Movavi Screen Capture Studio for Mac comes in the form of its editing features.

After you’ve captured any video, you can open it in the editor and use the tools there to get rid of unwanted segments, merge clips, improve the video quality, or even include background music and stylish animated transitions.

Moreover, you can convert the videos to any popular media formats and watch the output file on any portable device through the mobile preset option.

As you can probably imagine, there are numerous ways in which having editing tools could come in handy. For starters, you could use it to trim out any parts of your video that were inadvertently recorded.

Once you’re familiar with the features in Movavi Screen Capture Studio for Mac, there’s a lot more than you can do too.

I hope that you would like to save the live videos with this fantastic software and watch them later on your favorite gadgets.

What are you waiting for? Just download this software for free and get into the action. Make sure that you have the Mac version 10.6 or higher installed.

So, what’s your opinion about this Mac screen recording application from Movavi? Share your valuable thoughts in the comment section.