This is a battle post, Chromebook Vs Ultrabook which compares their key aspects with which you could choose the best gadget suitable for your requirements.

Everyone desires to have a sleek laptop for their everyday adventures as it is a versatile and helpful gadget to accomplish all types of tasks effortlessly. As the technology has progressed a lot, modern college students are increasingly depends on portable computing devices for interactive learning and so laptops for students are specially manufactured for them to carry out their academic works efficiently.

I have been using Laptop for long time and it is really good. But new devices like Chromebook, Ultrabook, Netbook and Notebook are being made by the laptop companies to meet the people needs. Every device has its own pros and cons and you could choose the best one based on your requirements.

If you’re my regular, you might know about my interest in comparing and explaining some awesome tech gadgets like Desktop Vs laptop, Can Tablets replace Laptops? etc. by illustrating with its basic information. Through this post, I wanna discuss something useful and so I took an opportunity to compare the two tech gadgets, Chromebook and Ultrabook in their important aspects with which you could select the exact one based on your requirements. Now, let’s begin the post with the rudimentary details of these two amazing devices.

What is an Ultrabook?

Ultrabook is a new class laptop which is light in weight with more battery life. This device is specifically designed to offer superior computing functionality with more convenience. It was announced in CES 2012 and the Intel has given the trademark name Ultrabook to describe specific features of laptop.

Some of the prominent features of Ultrabook are

1. Larger display screen (up to 15”) and latest Intel core processor to perform multi-tasking.

If thin laptop computers runs on Google Chrome OS, they are called Chromebooks. These mini laptops are specially designed to surf the web at greater speed and optimized with Google Chrome web browser.

Some significant features of Chromebook are

1. With Chrome Instant and Ominibox, lightning speed browsing is possible.

2. Works well with other devices like Tablets, Andriod Smartphones etc. running on chrome.

4. Files are kept safe with built-in Google drive and sharing of files is secure & perfect.

I hope you’re clear with the definition and basic specs of Ultrabook and Chromebook and now let’s begin the discussion “Chromebook Vs Ultrabook” for better understating.

Let’s start the conflict “Chromebook Vs Ultrabook” by equaling its key features. 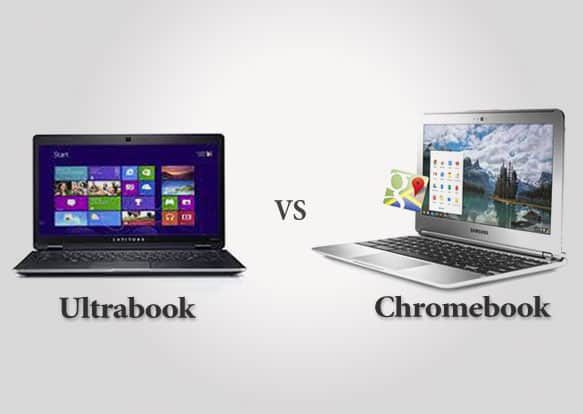 1. Price
Comparing the price of two gadgets is most important since the buyer might be fixed the amount to buy it. Chromebooks are inexpensive and you could get at the price of $200. But Ultrabook is costly and its price would be double that of a Chromebook.

3. Productivity
Since Ultrabook and Chromebook are portable laptops, both are good in surfing the web and regular office work. If you wanna perform enhanced graphics work or heavy tasks, both the gadgets will not be up to the speed and so the productivity remains same for these two laptops.

4. Freebies
You could get free cloud storage and specific amount of free Google drive storage in Chromebook. Moreover, you need not to have anti-virus software in Chromebook as it has in-built security features. You would not get these Freebies in Ultrabook and so Chromebook beats Ultrabook in this matter.

5. Internet connection and Backups
Most of the time, Chromebook needs internet connection to access the data stored online. Besides, even though the cloud providers have advanced backup solutions, you have to rely on third-party to protect your data. These difficulties are not realized with Ultrabook and hence it beats its challenger in this stuff.

Here the battle “Ultrabook Vs Chromebook” ends and both devices are good at certain aspects.

Why to Get Ultrabook?

If you’re looking for lightweight laptops with super sleek design, good battery life and faster drives, you can get Ultrabook. Its productivity is really good and it is more convenient for travel & educational purposes.

Ultrabooks are expensive and it doesn’t support optical drive. Also, it may contain few USB ports and contains sealed units which cannot swap out a spare battery.

What you can do with a Chromebook?

If you wanna get things done quickly and connect to web at most of the time, you can pick Chromebook. Here you could access all your files with more security, built-in cloud features and with powerful web apps. Even if you stay offline, you could carry the works like view and edit Google docs, play games & use powerful Chromebook apps from Chrome Web Store, view Microsoft office & Adobe files and much more.

As Google Chromebook is a Linux-based OS, certain applications cannot be installed in it and so you need to search some web-based alternatives for them. Less primary storage space, not supporting printer and optical disks, difficulties in handling heavy tasks and needs internet access at most of the time are some of the cons of Google Chromebook.

Both Chromebook and Ultrabook are new technology laptops which are specifically designed to give computing functions at greater level. As we are in the modern world, everyone wishes to have a fast and sleek laptop with more storage capacity. Some people need small weighing laptops with extended battery life for their travelling profession. For them, getting Ultrabook is an ultimate choice.

Recently, Google and VMware has announced that Chromebook can now run Windows apps and desktop through VMware service and it is really a glad news for the Chromebook users. Even though the Chromebook has some disadvantages, my preference would be this inexpensive, fast booting device as I stay at home with internet access.

Each tech gadget has benefits and limitations and hence you’ve to select the best device based on your requirements. I’ve finished writing this post by sharing my knowledge with my preferred choice. After undergoing the argument Chromebook Vs Ultrabook, which would be your ideal option? Do you have any of these amazing gadgets already with you? I am interesting to hear you and so discuss with me through comments 🙂

41 thoughts on “Chromebook Vs Ultrabook, An Useful Debate With Their Basic Details”