Twitter is a prominent social network, and I’m using it to build a relationship, network with like-minded people and promote my blog posts. Most of the businesses are using Twitter to increase their brand awareness and expand their social networking performance with useful Twitter tools.

Through a blog post, Twitter told that it is always experimenting new features to make its social network more engaging.

Recently, this company has announced some new features to its mobile apps that would let the Twitter users to post the pictures together with the tweet. They can tag people in the added images, and it will not affect the character limit of Twitter. Moreover, Retweet option has killed and now replaced with “Share” option.

If you’re using Twitter for business to expand its credibility and gain exposure, I hope my following suggestions would help you to do well with Twitter.

2. Don’t re-tweet the tweet where you get mentioned as it seems that you’re showing interest to increase your popularity. Do reply to that tweet with a thanks/appreciation message.

3. Don’t tweet the negativity content to your followers as they don’t like to be enclosed with pessimistic people and they’ll unfollow you. Do offer positive tweets to get love from them.

4. Don’t tweet too frequently at a particular time as they won’t like to follow you for long. Do schedule the tweets to spread all over the day. 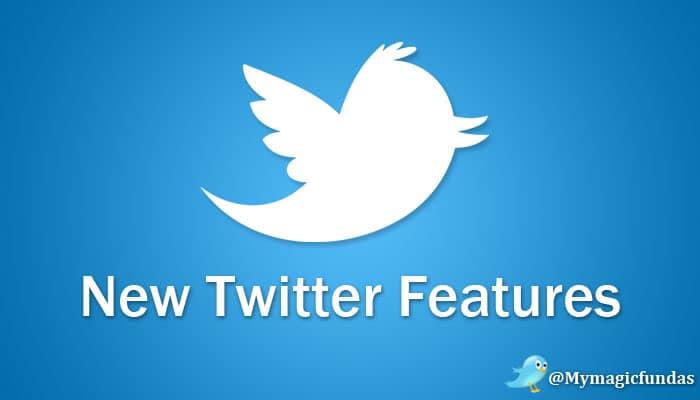 Twitter introduced photo tagging feature, and it appears first in smartphone apps to let the users share multiple pictures in their tweet. The user can tag up to 10 people for each uploaded picture, and it will not affect the 140 words character count.

Adding multiple photos option to the tweet is a new Twitter feature, and it is currently available for iPhone users with the new Twitter App. This Twitter update will come soon for Android users & twitter.com. The user can add four images from their device and hit the tweet button to make the tweet more visual.

3. No hashtags and @-replies hereafter

It is shocking to hear that Twitter is considering getting rid of @-replies, which is used to mention other users and Hashtags, which signifies the search term. News say that Twitter’s head told that they are working on moving the framework of Twitter into the background and to increase the high-quality interactions.

As Facebook and many websites offer sharing option, I think that the Twitter have decided to have the same choice. Yes, the familiar Retweet option is now replaced with Share option to share the tweet with others or adding comments before sharing. This feature is now available in Twitter iOS App.

Twitter is going to roll out a fresh music strategy this week, and it pulled its old music App from iTune’s store. To create a real-time chart of trendy music, this short-messaging service is looking for the partnership with three music leaders: Beats Music, Vevo and Soundcloud.

If you’re an iPhone/iPad user, you can download the app with new Twitter features that were recently updated on March 26th, 2014. Twitter app for ios devices

Why Twitter constantly experiments new features? It is estimated that the user engagement was down, and overall growth of user appears to be inactive. Besides, 1 million people have registered in Twitter and then were inattentive over there.

So, Twitter has decided to go more social and often to introduce some new Twitter features. Also, to give an enhanced look and feel like its rivals, Twitter is still experimenting with some beneficial functions, and they’ll be available soon for its users.

I hope that Twitter would make the user’s photo sharing experience better with its new updates. Since some best apps for business are being used, the Twitter app with new and upcoming features will be pretty handy which would increase the user engagement.

Having complete profile & upright Twitter followers, involving meaningful discussions and using new Twitter features would help the business to grow well with it.

What do you say about the new Twitter features? Will they help its users? Let me know your views on this latest news on Twitter through your treasured comment.

51 thoughts on “Keep Yourself Updated With New Twitter Features”